The big news for March 1918 was the German Spring Offensive, but first there was a flurry of peace treaties. On 1 March Bolshevik Russia signed a peace treaty with the Finnish Socialist Workers’ Republic, which had emerged in the industrialized south of Finland in January.  Unfortunately for Lenin, the Workers’ Republic was not at all popular among most Finns, and the result was a civil war in which the “reds” were supported by Moscow and the “whites” by Berlin, which signed a treaty of peace with Finland on 7 March.  In terms of barbarity the Finish Civil War quickly became a small-scale forerunner of the far greater horror that was the Russian Civil War. 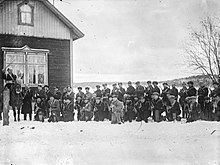 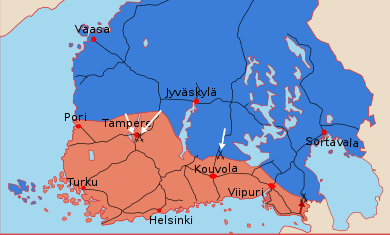 The Finnish Civil War during March

On 5 March Romania agreed –what choice did she have? – to a preliminary peace with the Central Powers, Bulgaria and Turkey and four days later signed a peace with Russia, a far easier proposition.  Bolshevik Russia, meanwhile, finally bowed to the inevitable on 3 March (the day after the Germans captured Kiev), and Grigori Sokolnikov (killed in prison in 1939) signed the draconian Treaty of Brest-Litovsk.  Russia lost the Baltic states, Belarus and the Ukraine (as personal possessions of the Czar, Poland and Finland were already gone), which meant that a quarter of the former Empire’s population and industry now belonged to the Germans. 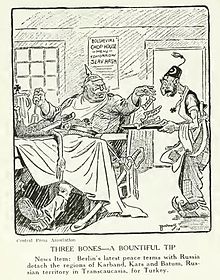 Slivers of the Russian Empire for Turkey 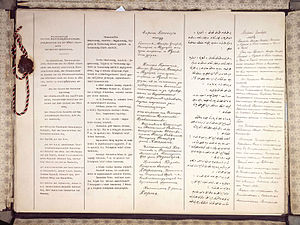 This might have been a great deal for the Germans had there not been a Western Front.  Brest-Litovsk did free up several hundred thousand troops needed for the planned Spring Offensive – Germany’s last shot before being overwhelmed by the Americans – but the desire to secure this eastern empire and its resources left a million men scattered from Poland through the Ukraine.  Inasmuch as the attempt to establish a Ukrainian puppet state would fail and the expected resources never appear because of constant revolts against the occupying troops, Ludendorff would have better served his country by evacuating everything east of Poland.

Hindenburg the figurehead and Ludendorff the ruler

The aforementioned Spring Offensive (or Ludendorff Offensive or Kaiserschlacht) began on 21 March.  Ludendorff had collected 74 divisions (out of 192 in the West) and 10,000 guns and mortars, spread along the 43 mile front from Arras south to La Fère on the Oise River.  The German Seventeenth Army, under Otto von Below, the Second Army, under Georg von der Marwitz, and the Eighteenth Army, under Oskar von Hutier, faced the right wing of Julian Byng’s Third Army and Hubert Gough’s Fifth Army.  The strategic aim was to move northwest from the breakthrough and cut the British off from the English Channel and the French to the south, forcing negotiations. 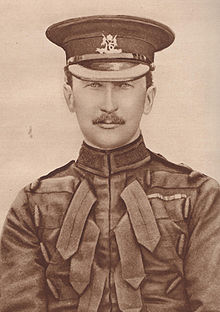 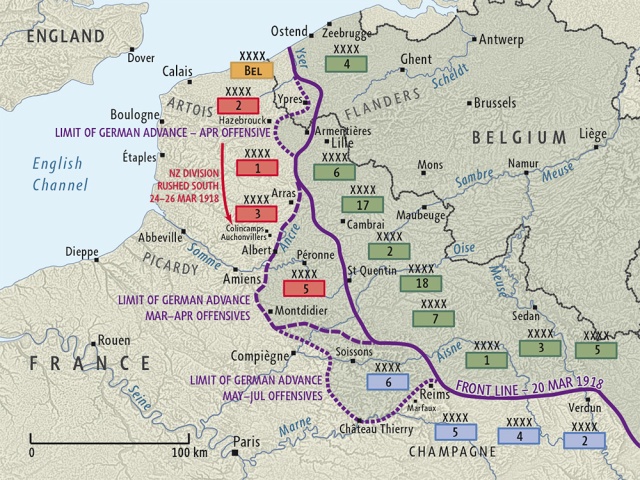 The initial phase of the offensive, Operation Michael, would throw 44 divisions, many just specially trained for rapid advance, at the line from Arras to south of St. Quentin.  The northern elements of the advance would take Arras and head northwest, while the southern units would move to the Somme and hold it against counterattacks.  Ludendorff ordered a massive but relatively short initial bombardment in order to preserve some element of surprise, but a week before the launch the British knew from reconnaissance, prisoners and deserters a big push was coming and shelled German assembly areas.

In the early hours of 21 March the shells began raining done over a 40 mile front, 3,500,000 in five hours, the largest bombardment of the war. The British front lines were severely disrupted by gas and smoke and the rear areas and supply lines pounded by heavy artillery, and more important, communications between headquarters and the fronts were severed.  Further, a thick fog came with the dawn, allowing the German troops to sneak by defensive positions and infiltrate the rear.

The offensive got off to a great start, and within days the British were engaged in fighting withdrawals in order to protect exposed flanks and compelled to call in French troops to stem the German tide at the southern part of the front. Not only were the British dramatically outnumbered in divisions, but many were seriously exhausted and understrength.  But it was certainly not a rout, as British and Commonwealth losses demonstrate.

German AV7 tank near the Somme

For all the initial success, however, the offensive ran up against the usual barrier: the difficulty of resupply and consolidation in the wake of a rapid advance. Making it even more difficult in this case was the fact that much of the terrain had been fought over two years earlier during the Somme Offensive and was a lunar landscape virtually impassable for wheeled vehicles.  Further, when the Germans withdrew to the Hindenburg Line in 1917, they had destroyed everything that might be of use to the Allies and now had themselves to deal with the devastated infrastructure and poisoned wells.

Advancing over the Somme battlefield

Superficially Michael looked a success.  The Germans had penetrated 40 miles (light years in Great War terms) in the center of the offensive and collected 75,000 prisoners and about 1200 square miles of French turf.  But they had not taken Arras and were stopped short of Amiens, and more important, they had suffered some quarter million casualties, particularly among the elite Stormtroopers (Stoẞtruppen).  The Allies had lost about the same number, but huge American reinforcements were beginning to arrive and Allied war production could easily replace the lost materiel.  The Germans could not.  The Spring Offensive would continue for another three months, but many in the military were already deciding the war was over for Germany.

(For an excellent account of Operation Michael from the point of view of a German infantryman I recommend the personal memoir of Ernst Jünger, Storm of Steel (Stahlgewittern).  Jünger was present at the Somme, Cambrai and the Spring Offensive, where he was seriously wounded and concluded that Germany could not win.  He survived the war (and the next as well) and was the rare enlisted man to be awarded the Pour le Mérite.) 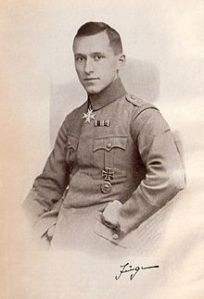 Operation Michael underlined the problems of coordination between the British and French high commands, and on 26 March General Ferdinand Foch was chosen to coordinate Allied activities.  In April he would be named Supreme Commander of the Allied Armies, a long delayed development.

In other news, on 21 March the Commonwealth troops in Palestine began crossing the Jordan River, heading for the key Turkish position in Amman, which controlled the all-important Hejaz Railway. By the 27th they had occupied the Moab hills and assaulted Amman itself (The First Battle of Amman 27 – 31 March), but Turkish/German counterattacks forced them back to the west bank of the Jordan by 2 April. 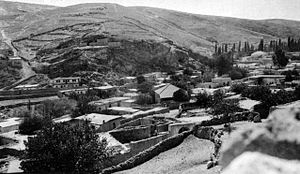 The Jordan Valley and Amman

Bridge across the Jordan

More interesting, on the same day the Jordan was crossed the Germans began shelling Paris – from 75 miles away. Near Coucy-le-Château-Auffrique, behind their lines, the Germans had emplaced the largest artillery piece (in terms of barrel length – 112 feet) of the war, the 256 ton Paris Gun (Paris-Geschütz), also known as the Emperor William Gun (Kaiser Wilhelm Geschütz). The gun fired yard long 234 pound shells, which traveled 25 miles up into the atmosphere, the first manmade objects to enter the stratosphere, and the range was so great that the rotation of the earth needed to be taken into account in aiming the weapon. 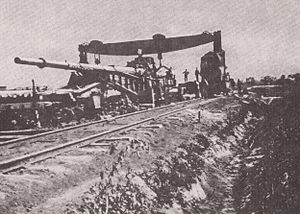 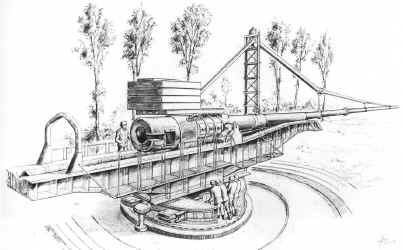 The guns – there were three of them – were designed by Krupp engineer Fritz Rausenberger and marvels of engineering for the time, but as an effective weapon they had serious drawbacks. Inasmuch as the shell had to be sturdy enough to withstand the pressures of firing, it could only carry 15 pounds of explosive, a trivial amount when the smallest target you could expect to hit was a city.  (A proposal to employ a sabot-mounted shell, which would increase the explosive payload was inexplicably rejected.)  Further, each shot wore down the barrel enough that the next shell had to be slightly bigger, and after 65 had been fired the barrel was sent back to Krupp to be restored.  An average of 20 shells a day were fired, amounting to only 300 pounds of explosive delivered in small packets. 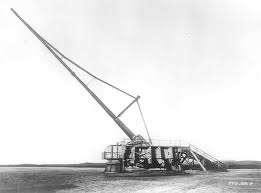 The shell and propellant

Clearly the gun was not intended to level Paris, but to undermine morale in the capital.  But when the firing stopped in August (the Allies were approaching the site), only 250 Parisians had been killed and 620 wounded, and after initial confusion regarding the source of the shelling Paris shrugged off the threat.  The psychological offensive had failed.  On the other hand, Germany had reached the stratosphere.

On a lighter note, the first confirmation of a new strain of influenza came on 11 March.  It was found coursing the bloodstream of Private Albert Gitchell at Fort Riley, Kansas, though the ultimate origin of the disease is still in dispute.  This was the “Spanish Flu” of 1918-1919, so named because more cases were reported in neutral Spain, where there was no military censorship.  It would kill 3% to 6% of the human race. 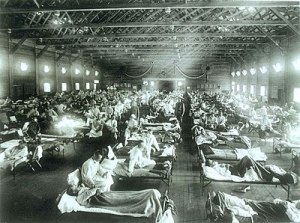 The influenza hospital at Fort Riley