(There is nothing interesting or perhaps even sensible I can say about Gaza.  Meanwhile, I must mention that another boon companion, George the cat, has now followed his friends Alfred and Lucy on that final journey.  This is getting harder and harder) 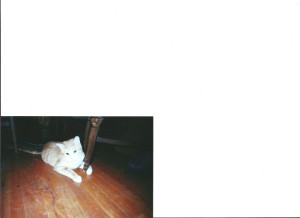 While in Berlin in May, I had the opportunity to visit the American embassy, a metaphorical and literal bastion of American power.  I do not normally go out of my way to visit American governmental establishments and submit myself to the scrutiny of humorless and self-important functionaries, but I wanted to visit that part of Berlin and was naturally curious about our diplomatic fortresses in the age of terror.  The trip was one of the excursions scheduled by our (and Stanford’s) man in Berlin, who had frequent dealings with the embassy.  I was consequently restrained in my comments in the embassy.

The embassy is about as centrally located as one can be in Berlin.  It sits immediately to the south of the Brandenburg Gate on the corner of Behrenstraße and Ebertstraße, about 300 meters from where Hitler died in the bunker and more importantly, about 400 meters from the Bundestag (former Reichstag), the German federal parliament.  Since the Berlin government defiantly refused to allow the Americans to block off streets in the center of their city the embassy is hardly aesthetically pleasing, inasmuch as it had to be built as a fortress to satisfy America’s growing paranoia.  Surrounding the compound is a ring of low concrete pillars, designed presumably to stop any car bombs.

Rear of the Festung

Entering by the south door, we – a collection of former Stanford students in their late 60s – of course had to go through American airport type security in order to reach a conference room that was undoubtedly the only place accessible to guests in that part of the building.  Naturally, this was all a very serious process, as the possible terrorists were grudgingly admitted to their own embassy.  The paranoia, incidentally, extends to the office of the ambassador himself: his own personal staff members are required to leave everything outside when they enter.  By way of contrast, I have heard that security at the Russian embassy is incredibly slack.  Now, that is a fine irony.

To my immense surprise John Emerson, the ambassador for the last year, popped in to chat for a while.  I never thought I would actually meet an American diplomat, not that they would have anything interesting to say unless they were career State Department people.  Perhaps he had the time for us because we were Stanford graduates and thus opinion makers in our communities.  More likely it was because no one besides the British diplomatic staff would talk to him because of the NSA snooping.  My first thought was to ask him how much money he raised for Obamas in order to get the job, but I did not what to injure our friend’s relationship with the embassy.  I later learned that he did indeed raise several million for the President’s campaign, hardly surprising since that is how most ambassadorships are handed out.  All the Russian ambassadors in Europe are career diplomats and speak the local language.  But he did seem to know a little about Germany.

He left after a short while, probably to go get slapped around by an obviously annoyed German Chancellor, and his place was taken by an expert on Eastern Europe, doubtless chosen because of her ability to deftly sidestep embarrassing questions.  Right off I asked her if staff who talked to visitors received political instruction, and she of course answered that they did not and all had their own opinions but of course had to be on the same channel (or some such metaphor).  In her answers to our questions she then proceeded to spew the exact party line of the administration and artfully dodge questions that could not be honestly answered without departing from that line.  Since the NSA was in the air (literally) she dished out the standard fare on the subject:  Snowden of course needs to be brought to justice for his crimes and god knows what he is telling the Russians (Why else would he be there?), but it is good to have an open dialogue on the subject.  As usual no mention was made of the fact that without Snowden there would be absolute no dialogue and no knowledge of what the spooks were doing, and perhaps he was in Russia because it is one of the few places he could not be kidnapped by the CIA.

And all the while, equipment on the embassy roof was monitoring the conversations and electronic traffic of the nearby German government.  It was all I could do to refrain from loudly voicing my indignation and opinion of her and the government she represented.  An obscene gesture directed at the embassy from the sidewalk was the only protest I could make.

The author salutes his country

When I was in Berlin 50 years ago, I was actually proud to be an American.