In Chapel Hill, North Carolina in the early evening of February 10 a 46 year old man, Craig Stephen Hicks shot and killed three University of North Carolina students, Deah Barakat, 23, Yusor Abu-Salha, 21, and Razan Abu-Salha, 19.  As their names readily suggest, the three were Muslims, American born, and they were all killed by a handgun. (Anchors on CNN kept describing them as “wonderful” young people, which I expect they were, but is this objective reporting? Would it be any less a horrible crime if they were unemployed and obnoxious?)

The shooter – another victim of the Second Amendment 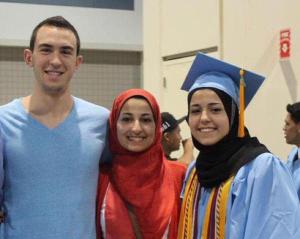 Victims of the Second Amendment

The details of the shooting are unclear – police are slipping into the secrecy mania that seemingly affects most public servants – but it appears to have resulted from an ongoing dispute over a parking place, the sort of trivial incident that is increasingly leading to the use of deadly force in America. The shooter and his victims were neighbors in a residential community near the UNC campus, and the students were shot in the apartment of the newly-wed couple, Deah and Yusor. The circumstances of the crime are mysterious. Each was killed by a single shot to the head, and while the police found eight shell casings, suggesting that Hicks missed with five of his shots, three clean shots to the heads of three different people is nevertheless still strange. Unless the victims were completely frozen with fear, Hicks must be a phenomenal shot. I have shot handguns, and even at close range hitting a moving target as small as a human head is not at all easy. But again, we do not know all the evidence.

Because the victims are Muslim, the possibility of a hate crime is being tossed about. In online posts Hicks has labeled himself a “gun-toting atheist” and has made fun of Christianity and Islam, but so far there is no word of any actual expression of hate for any group. Being contemptuous of Christianity and Islam is not hate; I do not have much regard for any of the Abramic religions. That he had a house full of guns and ammunition means only that he is like thousands of other Americans. The fact that his victims are Muslim may have tipped him into violence, but it may simply be this was the argument when he lost control.

I find the whole idea of a “hate crime” a bit disturbing. Our legal system rightly makes distinctions concerning intent – thus the difference between homicide and manslaughter –   but considering motive as a factor in determining the seriousness of the crime and the extent of the punishment strikes me as a dangerous practice. This comes perilously close to punishing a person for what he was thinking, and in a free society one may think whatever he wants. So long as one is not creating an immediate physical danger, such as inciting a riot or an attack, hate speech is protected under the First Amendment, and presumably so is hate thought. The distinction between killing a man because you hate him and killing him because you hate the group he belongs to seems an extremely fine one. Suppose a violent thief happens to hate Muslims and murders a Muslim whose money he wants to steal. Is this a hate crime? And what groupings qualify for hate crimes – just those defined by religion or ethnicity? Suppose you hate Republicans and kill one for that reason. Is that a hate crime? Slaughtering schoolchildren because you are an adolescent with problems and slaughtering schoolchildren because you are an anti-Semite seem equally heinous to me. Certainly, the innocents are equally dead.

More important than this exercise in social engineering is the fact that yet more people are dead because someone, whatever he felt about Muslims, got angry and had immediate access to a firearm. Petty disputes, such as over parking or being cut off on the highway, have become deadly because of the availability of guns and the consequent ability to express anger in a lethal manner. Silly arguments that might have resulted in a fist fight now result in a dead human being. That an “armed society is a polite society” is clearly a ludicrous proposition, especially in a country, such as America, that has long had a culture of violence. Respect engendered by fear hardly strikes me as a laudable social goal. 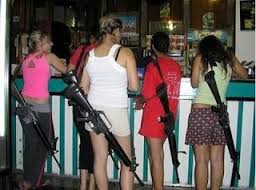 Women who hang out with guys with small dicks?

Concealed carry only exacerbates the fear: you never know who is packing and might turn on you.  The state of New Mexico is even considering allowing concealed carry in bars, an idea that should strike sensible people as madness.  Is alcohol and guns any less threatening than alcohol and automobiles (not that New Mexico is particularly concerned about the latter)?  But open carry is also dangerous – and downright embarrassing.  In what other civilized country can you see shoppers carrying assault rifles as they push their carts about?  An armed society is not a polite society; it is some ways a failed society.  And “stand your ground” legislation, as the state of Florida has amply demonstrated, does nothing more than promote violence, suggesting to some people that when confronted with some offense or imagined threat, they are quite justified is blowing someone’s head off.

The Second Amendment – the right to bear arms – made perfect sense in the late 18th century.  It does not in the early 21st century.  We no longer have a “well regulated militia” but rather a professional army, nor do we have a frontier requiring an armed citizenry.  In modern warfare untrained armed citizens are useless against any real military force, and civilians with guns are no defense against tyranny so long as the military remains obedient to the government.

Personal firearms for self-defense may make sense in some few situations, but packing a gun is more likely to find you trouble, especially with the increasingly trigger-happy police forces.  Carrying an assault rifle into Walmart has absolutely nothing to do with personal safety; it is a stupid macho demonstration that disturbs more sensible citizens.  Home defense is more reasonable, but the fact is if you have a firearm in your house you are twenty-two more times likely to experience a serious gun accident, suicide attempt or assault/homicide.  On the average, for every one time a home firearm is used in self-defense or a justified shooting, there were four accidents, seven assaults/homicides and eleven suicide attempts.  Even just living in states with large numbers of guns dramatically increases your chance of being shot.  According to the CDC in 2011 there were 32,351 gun deaths in the US (and we worry about terrorists?), of which 591 were considered accidental, victims under the age of 18 accounting for 102 of those deaths.

I expect one of the reasons American police are employing so much deadly force is because the country is awash in firearms, most of them perfectly legal.  The police have come to expect that any perpetrator will have a gun, and the result is a hair trigger mentality and an increase in shootings of unarmed individuals.  How often do you hear about this sort of thing happening in Europe, where access to firearms is strictly controlled?

What can we do about this?  Well, nothing.  Restricting gun ownership runs right up against the damn Second Amendment, and it would be easier to repeal the law of gravity.  There are of course measures short of this – background checks, prohibition of private sales, registration of all firearms, requiring a license to own a gun – but apart from background checks (less effective when you can turn around and legally sell a gun to someone on the street) it is extremely unlikely.  Politicians, especially Republicans, are sensitive to their gun-owning constituents, and there is of course the National Rifle Association.  There is always a cry for gun control legislation when some loonie massacres schoolchildren, but it rapidly fades, particularly in the face of NRA propaganda and money.  Until the 1970s the NRA was actually a reasonable organization, interested in gun safety and open to gun control, then a leadership change initiated its evolution into little more than a shill for the gun industry, resistant to even the slightest limits on firearm acquisition and use.

People seem oblivious to the irony that while we are wringing our hands and spending billions of dollars to protect Americans from Middle Eastern terrorists who would have a tough time getting at anyone in this country, virtually nothing is done to stop the homegrown slaughter that annually takes thousands of American lives.

And in case you were wondering, yes, I do own guns.  They are almost all antiques, which I collect, and I rarely go shooting, but I must admit that when handling something like an AK-47 I can feel a taste of the macho high that motivates the jerks running around the woods of Idaho in their camos.  Fortunately, I am not an idiot.